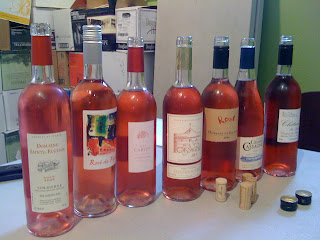 I am taking a week off of the Riesling Chronicles to comment on an interesting tasting this afternoon.  I sat down with the representatives of Robert Kacher Selections for our annual tasting of his newest rosés.  There was a time, not many years ago, when this tasting was short and, pardon the pun,  sweet.  As interest in this category has grown so have Bobby’s selections.   This tasting covered six different wines, all from the south of France.  All of the wines are dry, less you think pink wine must be sweet, and are a necessary part of the summer months for me.

I won’t go into the details of each wine but there were basically three different styles represented.  The first is a dry, fresh, higher acid style; perfectly refreshing and interesting with things like grilled oysters, shrimp or stuffed and baked tomatoes.  (Speaking of which, I took my first two tomatoes off the vine this week, summer is officially here!)
The second style is richer, deeper and shows more complexity.  These are rosés that are almost red wines in texture but white wines in flavor.  Tasting two examples my mind started to wander to things like grilled sausages with peppers and onions or halibut under a bed of roasted cherry tomatoes and artichoke hearts.
The final style falls between the two.  Not as refreshing as the first category, not as serious as the second, these are wines that I will reserve judgement on until later this summer.  Many times a wine in this category does not reveal its character now, but will as it settles down in the bottle.
Look for at least one feature in the June Newsletter and one as part of our “Travel the World With Tim’s” feature that we will roll out in June.